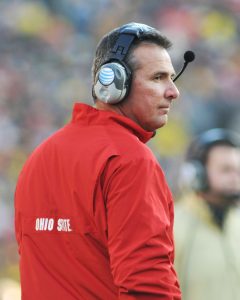 The sports world was rocked when journalist Brett McMurphy recently published an article about Ohio State former assistant coach Zach Smith and domestic violence with his wife, Courtney Smith.  Despite indications that Head Coach Urban Meyer knew about the abuse between the Smiths, Meyer denied knowledge of the 2015 incident between them in a Big Ten media days press conference.  Apparently, Zach Smith was arrested in 2009 on suspicion of aggravated battery against his pregnant wife in Florida when Meyer was coaching at the University of Florida.  Meyer knew of the 2009 incident and hired him to be Ohio State’s wide receivers coach anyway. Zach Smith was then charged with criminal trespassing in May 2018 at his now ex-wife’s home and his ex-wife was granted a protective order.  There were nine police reports involving the Smiths between 2012 and 2018.  The story with Urban Meyer has yet to play out—but it is agreed Zach Smith has a serious issue with domestic violence.

If you are accused of domestic violence in Florida, the number one thing you must remember is to REMAIN SILENT.  Ask for an attorney and do not give any statement to police, written or otherwise.  Also remember that you cannot contact the victim! There may be protective orders in place and anything you say or do to the victim can be used against you.  It is difficult when there are children involved but contact your lawyer for advice on how to deal with timesharing. Courts treat domestic violence very seriously and you can find yourself in jail for quite a while if you are not careful to follow orders in place.  As in Zach Smith’s case, you could find yourself with additional charges like trespassing and stalking.

Under Florida law, Domestic Violence Battery is defined as any actual and intentional touching or striking of another person without consent, or the intentional causing of bodily harm to another person, when the person struck is a family or household member.  Penalties can include up to one year in jail or 12 months probation and up to a $1,000.00 fine.  You may also face completion of a 26 week Batterer’s Intervention Program (BIP), additional community service hours, loss of concealed carry rights, and 5 days required jail if you are adjudicated guilty and there is bodily injury.

If you find yourself accused of domestic violence in Florida, contact an experienced Jacksonville Domestic Violence Lawyer to help you.  Call the Law Office of David M. Goldman, PLLC for a consultation to discuss your options.