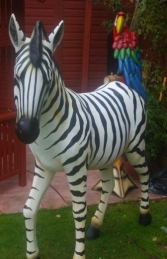 You may be waiting for the punch line for this joke, but there is not one. This is a true story about a man who received a OWI in Iowa after he and his girlfriend brought their pet Zebra and Parrot the a local bar. Officers pulled the man over shortly after leaving the establishment. The man failed the Field Sobriety Test with a BAC of .14. His excuse, “He was about to allow a passenger in the truck to take the wheel when he was arrested.”

The incident occurred on Sunday evening in Dubuque, Iowa outside the local Dog House Lounge. The man, 55 year old Jerald Reiter stated he frequented the bar and on most nights he is allowed to take his zebra inside, but that night they were serving food. He returned the animals back to his truck and allowed fellow patrons to take pictures of the zebra and parrot. He believes a fellow patron is the one who called the police on him.

See Our Other Related Articles:

The Players comes to Jacksonville, But I got a DUI. Now What?

Jacksonville Residents, Did you Know you can be Charged with DUI on a Zamboni?