In July of 2014, an Arizona homeowner shot and killed one of two intruders who had entered his home in the middle of the night. The homeowner was eighty (80) year old Thomas Greer, who had been assaulted during the home invasion and suffered a broken collar bone, according to ammoland.com. Later, When Greer spoke with reporters regarding the attack and the shooting of the female burglar, Mr. Greer made comments that weren’t the smartest of things to say. In fact, the forensic evidence showed that what Greer told reporters wasn’t even the true about what happened. 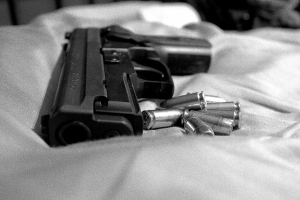 What Greer told reporters is that the female told him she was pregnant and begged him not to shoot. He said that he shot her in the back as she ran out into his front yard in an attempt to escape. However, the the forensic evidence showed that the female intruder had been shot once in the chest and once in the knee. The evidence also showed that the woman had been shot inside Greer’s home, and later ran outside. The prosecution made its decision not to charge Greer with the shooting death based what the forensic evidence showed, but it could have easily turned into a situation where Greer could have been in need of a criminal defense lawyer himself.

Greer’s example comes to us from Arizona, but could have easily taken place anywhere in the State of Florida. Under Florida law, specifically Florida Statute 776.013, a person is justified in using or threatening to use deadly force when an intruder enters a residence without permission. The law creates a presumption that the person using deadly force in this situation to defend his or home home was reasonable in his or her fear of imminent death or great bodily harm. The issue with Mr. Greer’s statements is that the statements have the ability to chip away at the legal presumption of fear of imminent death or great bodily harm.

As a Jacksonville criminal defense lawyer, I will always advise my clients to politely refuse interviews by the media. The statements made by Mr. Greer are of the type that cause outrage in the community, because they paint the picture of him as a cold-hearted killer. The thought of a pregnant woman being shot in the back after begging for her life and running away will surely anger most people. Pressure from the community can oftentimes oblige State Attorneys, who are elected officials, to pursue charges.

Being slow to speak not only applies to the media, but to police also. You should let law enforcement know that you would like to speak with your lawyer prior to answering any questions. At the Law Office of David M. Goldman, PLLC, we work with gun owners throughout the nation involving gun ownership, rights, and responsibilities. If you or a loved one are ever in a position where you are forced to eliminate a threat by firing your gun, call us immediately on our emergency line, (904) 302 7629. We can help.