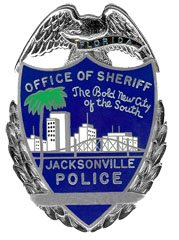 Earlier this week, Tuesday, three uniformed police officers were shot at while conducting an undercover investigation following a recent carjacking in the area. Luckily none of the officers were hurt during the incident, but the vehicle did sustain two gun shot wounds. Later in the week, Jacksonville Police arrested Fred Calvin Childs for the attempted murder of the police officers.

The Jacksonville Police were located at the Forest Park apartment complex shortly after 8 PM on Monday conducting an undercover investigation. During their third trip around the complex someone in a crowd of people opened fire on the officers. Most of the shots missed, but two struck the passenger side of the vehicle. The police left the area and quickly returned to question witnesses. Several people were taken into custody for questioning and later Mr. Childs was arrested after finding a handgun in his apartment.