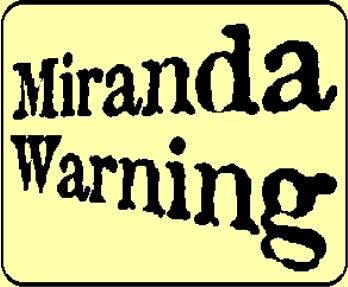 Crime can happen anywhere in Jacksonville and can happen to anyone, but just because you have been arrested for an alleged Jacksonville Criminal Offense does not mean you don’t have rights. The right I want to bring to the attention of Jacksonville Residents today is one’s rights under Miranda v. Arizona, 384 U.S. 436 (1966). These rights are more commonly referred to as your “Miranda Warnings.”

Under your Miranda Warnings, upon arrest and taken into custody, the police must notify the criminal defendant of the following rights:

If police do not comply with Miranda warnings when arresting a person in Jacksonville, Florida, a * Jacksonville Criminal Defense Lawyer may be able to suppress (throw out) any statements made by the Jacksonville Criminal Defendant. However, there are exceptions to this rule, which can be found in other Supreme Court rulings, such as Florida v. Powell, 130 S.Ct. 1195 (2010). (Noting an exact recital of the Miranda warnings is not required, as long as the rights are understood).