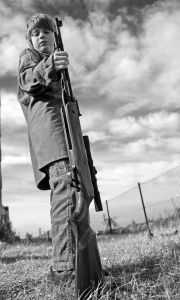 Today, I learned about a game that some children play in the Jacksonville, Florida area. It is called “Man Hunt.” It appears to be a spin off of hide-n-seek and tag, but firearms are involved. According to an article entitled “How to Play Man Hunt,” the players set up a large perimeter. All players, except the hunter or hunters, are given a time period to hide.  Then, the hunt begins. While this article, does not reference the use of firearms or weapons in any way, it appears that children have taken the game a step further and incorporated air guns and/or BB guns.

Not only is this dangerous to the children involved and bystanders, it can result in civil and criminal liability for parents. As for civil liability, a parent that allows a child to use an air gun or BB gun in a negligent fashion or without supervision may be sued for negligence and be held liable for any damages to person or property. As for criminal charges, Florida Statute Section 790.22(1) states:

“the use for any purpose whatsoever of BB guns, air or gas-operated guns, or electric weapons or devices, by any minor under the age of 16 years is prohibited unless such use is under the supervision and in the presence of an adult who is acting with the consent of the minor’s parent.”

Florida Statute Section 790.22(2) declares that it is a second degree misdemeanor if an adult responsible for the welfare of a child under 16 years old knowingly allows that child to violate the statute listed above.  Indeed, parents should watch their children closely to prevent violations of Florida firearm’s law in Jacksonville.  This will not only prevent an arrest, but also prevent injury to others.  In fact, a ten-year-old boy died last month due to an injury inflicted while playing cowboys and indians with his father’s air gun.