February 14, 2018 is a day that will never be forgotten when a gunman by the name of Nikolas Cruz opened fire devasting Marjory Stoneman Douglas High School in Parkland, Florida killing 17 students and injuring multiple staff members.   Scot Peterson was an armed officer at the school at the time of the shooting.  Peterson found himself caught in the middle when he was criminally charged with the inability to take action in the protection of students and staff members. 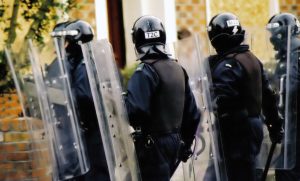 Peterson was admitted into Broward County Jail and was charged with eleven counts of second- and third-degree felony neglect of a child (F.S 827.03) and a second-degree misdemeanor of culpable negligence (F.S. 784.05).  As to neglect of a child, the State must prove failure or omission to provide a child with care, supervision, and services necessary to maintain the child’s physical and mental health as well as the failure of reasonable effort to protect a child from abuse, neglect, or exploitation by another person.  To convict on misdemeanor culpable negligence, the State must prove exposure to personal injury.  During the school shooting, Peterson allegedly retreated to safety instead of taking action against the gunman when shots were fired.  Shortly after the incident, Peterson obtained a bad reputation and was nicknamed “the Coward of Broward,” leaving families in an uproar about his failed negligence.  Mr. Peterson stated that he continuously replays the shooting over in his head and is quoted as saying, “There wasn’t even time to think, it was my job and I couldn’t find him (the gunman).”

The charges that were filed against Mr. Peterson are not typical; it is very unusual for law enforcement to be held criminally liable for not protecting the public.  Constitutional law, as interpreted by the Supreme Court, does not generally provide for the public to have the right to expect the police to protect against harm.  The charges against Peterson in regard to the neglect of a child and culpable negligence is not specifically for law enforcement and is usually applied to parents.  This case brings into question what this may mean for other officers and how school officers may need to re-evaluate how to respond in these situations.  The critical question that still stands is whether Peterson had a constitutional duty to protect the children from the actions of Cruz.

If you have questions about neglect of a child and culpable negligence or how they may pertain to law enforcement, contact an experienced Jacksonville Criminal Defense Lawyer to help you.  Contact the Law Office of David M. Goldman, PLLC for a consultation to discuss your options and rights.