A Florida teenager is wanted in connection with a shooting at a Jacksonville bus stop.  16 year Edgar Robles is still not in custody.  A $3,000 reward has been offered for information leading to Roble’s arrest.  The teenage is wanted for two counts of attempted murder and one count of shooting deadly missiles, according to news4jax.com.  Robles brought a handgun to the bus stop to confront other students on the bus; Robles, at 16, is not quite old enough to exercise gun rights.  Two teenage girls that were passengers on the school bus were hit by gunfire during the shooting.  One of the girls was struck in the back of the head, while the other was shot in the cheek.  Both girls are reportedly in stable condition. 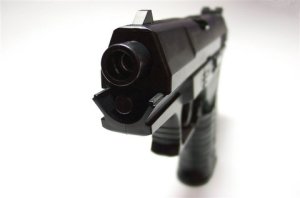 Whenever anyone shoots a gun at a bus stop, there is likely to be a lot of attention focused on the incident.  In this case, all of the people involved are children– everyone from the shooter to the victims and witnesses.  These types of unfortunate stories put Florida gun rights in jeopardy over time by showing guns in a negative light.  In this instance, Mr. Robles is a 16 year kid who can’t legally own a gun.  Requirements to purchase a firearm can be found by visiting the Florida Department of Law Enforcement’s website.  To purchase a long gun or rifle, a person must be at least 18 years old.  A person must be 21 to purchase or own a handgun.  Even with age requirements on purchasing and owning guns, State Attorney Angela Corey stated that more and more children are attempting to solve their issues with guns.  Florida law has continued to aim laws at deterring gun violence.  Florida law creates minimum mandatory sentences for crimes that involve guns.  It is commonly referred to as “10-20-life” law.

Stories like this more are sad and outrageous.  They help spread the message that more regulation is needed.  More gun regulation creates more possibilities for law abiding gun owners to become ensnared by laws that were never drafted with them in mind in the first place.  Contact the Law Office of David M. Goldman, PPLC today at (904) 685-1200 for more information on Florida gun rights.  We also have experienced Jacksonville criminal defense lawyers that can help if you or a loved one have been charged with a gun crime or other offense.  Initial consultations are free.