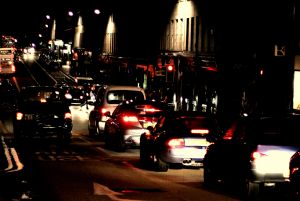 Drivers flash their lights by going from a low beam to a high beam. Usually, a Jacksonville driver does this to indicate to others drivers that there is something that they should be aware of. For instance, if a prudent driver sees a disable car on the side of the road, he may flash his lights to inform the oncoming vehicle of a dangerous situation. This could protect people in the disable vehicle as well on the driver and passengers of the oncoming vehicle.  As a child, my mother would flash her lights at other vehicles when she saw a dog wandering the highway. She did this to get the other vehicles to slow down.

Sometimes, Jacksonville drivers are ticketed for flashing their high beams at other vehicles. Jacksonville police officers issue the citation pursuant to Florida Statute 316.2937(7) which states that “flashing lights are prohibited on vehicles except as a means of indicating a right or left turn, to change lanes, or to indicate that the vehicle is lawfully stopped or disabled upon the highway or except that the lamps authorized in” this Section. However, this is not permitted. This Florida law was not meant to prohibit flashing your high beams in the manner listed above. In fact, a handbook issued by the Florida Department of Highway Safety and Motor Vehicles recommends that a driver flash his high beams at an oncoming vehicle that if another vehicle is approaching with its high beams illuminated. In

State v. Cason, a Seminole County court ruled that Florida Statute Section 316.2397(7) does not prohibit a driver from flashing his high beams or turning his lights on and off. The court found that it did not matter that the driver was doing so with the intent to warn other drivers of a police officer with a radar device.

Note only should a ticket issued in this manner be challenged by a Jacksonville Traffic Attorney, but it could be the basis for a motion to suppress. For example, a Jacksonville DUI Lawyer could try to get a DUI stop invalidated if the stop is based on these grounds.