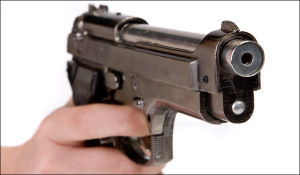 Exercising your Florida gun rights can turn into “gun wrongs”, if you don’t know what to do and what not to do.  Last week I received a call from South Florida.  On the other end was a panicked young concealed carry permit holder; we’ll call him “Eric”, which isn’t his real name for obvious confidentiality reasons.  Eric had been arrested for pulling his gun to stave off a would-be road rage incident.  As Eric drove, there was apparently something about his driving that ticked off another driver.  The other driver began to drive erratically, darting in and out of traffic to catch up with Eric.  Once the other driver caught up to Eric, the other driver rolled down his own window and began to yell at Eric.  Believing things were about to escalate into a bad situation, Eric pulled his gun to encourage the angry driver to back off.  Eric was subsequently arrested for Aggravated Assault with a Deadly Weapon, pursuant to Section 784.021, Florida Statutes.

Florida law defines an assault as “an intentional, unlawful threat by word or act to do violence to the person of another, coupled with an apparent ability to do so, and doing some act which creates a well-founded fear in such other person that such violence is imminent.”  Aggravated Assault with a Firearm carries a mandatory minimum sentence of three years in Florida State Prison under chapter 775, specifically Section 775.087.  I imagine that you are starting to see the importance of knowing what not to do as a gun owner.  This is not a very pleasant position to be in.  Making a claim of self defense may not be a viable option here.  Key to a self defense claim is that a person uses the same amount of force that is used against the claimant.  It also has to be a reasonable amount of force under the circumstances.  As a Jacksonville criminal defense lawyer, I’ve represented people that have been in Eric’s position.  The majority of them were law abiding citizens and good people that made a poor choice in a stressful situation.

I blame these mishaps on lack of preparation.  Being trained on what to do and what not to do can help you be prepared for the unexpected and save you a lot of trouble in the long run.  It’s like having a fire drill and practicing a pre-planned evacuation route .  I suggest that every gun owner take a course that trains gun owners on Florida laws that relate to gun ownership.    If you are interested in taking the course currently being developed by the Law Ofice of David M. Goldman, PLLC, send me an e-mail at msermons@jacksonvillelawyer.pro for more information.

If you or a loved one finds yourself in trouble, you need an experienced criminal defense lawyer working on your behalf to help achieve the best possible results in your case.  For instance, in Eric’s case, there is an argument that can be made that the absolute worst offense that could or should be charged against him is Improper Exhibition, which is a misdemeanor offense, rather than a felony that could land a person in prison.  At the Law Office of David M. Goldman, PLLC, we have experienced criminal defense lawyers that can help.  Call us today at (904) 685-1200.  Initial consultations are always free.